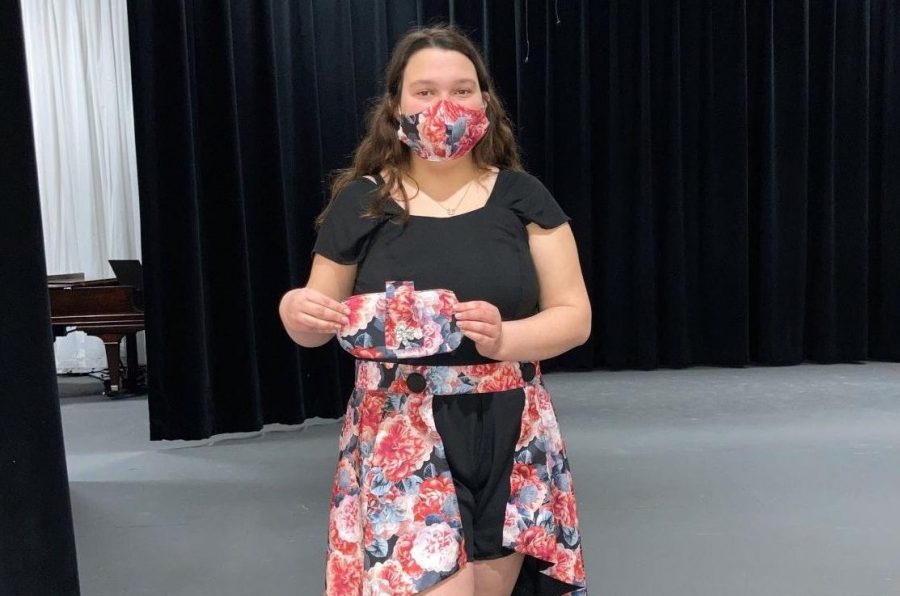 Vivi Sayer shows off her handmade outfit, including a mask and clutch purse.

Schuyler School’s Family Career and Community Leaders of America chapter, more commonly known as FCCLA, has just competed in State competitions for high school and middle school members. FCCLA is a nationwide organization that focuses on leadership skills and goal setting as an individual or group. Over forty students in the high school alone are members of this group.

Three of these individuals earned medals at State competitions. Due to concern over Covid-19, competitions were held virtually. “We had to submit our projects online, which was much more difficult than doing them in person,” Vivi Anne Sayer, one of the high school State competitors, explained. Along with Vivi, Melissa Escobar and Maddie Prochaska also competed. They won a gold medal in Fashion Construction, a silver medal in Fashion Construction, and a silver in Job Interview respectively. Three middle schoolers, Jaxminlett Bernal, Areli Arellano, and Jeily Pena Marino, also competed at the State level. They placed silver in Food Innovation, Silver in Focus on Children, and Silver in Focus in Children. FCCLA medals are based on the quality of work rather than the competitor’s challenge. In Fashion, Vivi Sayer made a dress by hand. “It took me 42.5 hours to sew. Along with that, I had to create a  display board, photo story, time log, cost Itemization, coordinate sheet, and planning process.”

Mellisa Escobar is the current FCCLA president, has been a member for three years and president for two. She will also be graduating this year. Her silver medal in Fashion Construction comes with a remorseful farewell. “As a senior graduating this year, I will miss FCCLA and all the friends I have made through FCCLA,” Mellisa admits. She hopes to see the Schuyler FCCLA chapter continue to grow in the hands of her other officers. Mellissa believes that FCCLA is a way to meet new people and develop life skills. She encourages any hesitant students to jump in and explore the many different projects that the chapter offers.