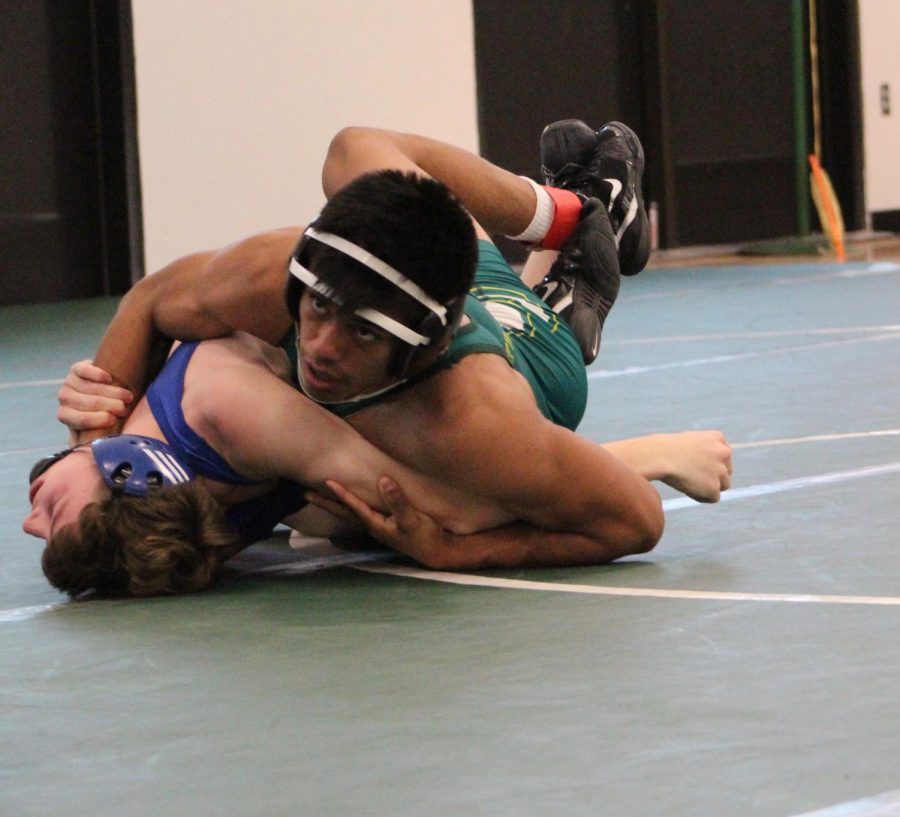 Jonathan Gonzalez working for a pin.

SCHS Warriors returned to State Wrestling at the CHI Health Center in Omaha, NE. This year SCHS had 4 State qualifiers whereas last year there were only two qualifiers. This year’s qualifiers include Jonathan Gonzalez, Edgar Diego, Gabriel Moyao, and Diego Maganda.

Jonathan Gonzalez, Senior at SCHS states “one of the challenges was staying calm and not getting nervous wrestling in the arena”, when asked about some challenges that came up during the State meet. This year was Jonathan Gonzalez’s first time qualifying for State, and he went 0-2. Edgar Diego, Junior at SCHS was shocked when finding out he qualified for State. Edgar Diego went 0-2. Some advice from Edgar Diego for future wrestlers who want to qualify for State is to believe in yourselves and push yourself everyday at practice. Gabriel Moyao commented on how he felt when finding out he qualified for State, “I was excited knowing that I was going to compete against the best people in my weight class. I was also nervous, but I was able to overcome it and wrestle hard.” At State Gabriel Moyao went 1-2. Diego Maganda went 2-2. According to Jeremy Hlavac, Physical Education teacher and Head Wrestling Coach at SCHS, the biggest challenge from attending State Wrestling was the changes. “The main challenges were the change of the state meet being 2 days instead of 3, it was a fast turnaround once you got there, and the time went fast for the wrestlers. I would say the biggest change was moving to 6 mats and only doing 1 class at a time”, said Coach Hlavac.

Coach Hlavac shares a message to the seniors regarding their last season “Thank you very much for everything you have done to help the wrestling program get to where it is. These seniors have brought leadership to room and at meets that were second to none this past season. I wish them the best of luck in everything they do. Remember once a Warrior, always a Warrior, I will be in your corner no matter what.” SCHS Warriors accomplished many things this season including making it to State.